MEMORANDUM TO PRIME MINISTER OF INDIA

1.That Kartarpur Sahib is a pious historical shrine where Guru Nanak sahib the founder of Sikhism passed away in the year AD 1539. Situated on the right bank of river Ravi, it is in the Pakistan territory but right on the Indo-Pak border and is clearly visible from Indian side opposite the Indian town of Dera Baba Nanak district Gurdaspur.
2. That we the Sikhs are agitating since April 14, 2001 to secure a Langha the direct free passage to it. Free means without the requirement of Visa or Passport.  At present a pilgrim visiting Kartarpur Sahib from Dera Baba Nanak has to traverse a to and fro distance of 532 kms. whereas if allowed Langha it is merely 9 km to and fro distance.
3.That our agitation is perfectly peaceful and that we just do prayers on the border at Langha Adda the proposed Corridor Point and that on no occasion have we taken law into our hands for the past 17 years.
4. That since we started the movement thousands of pilgrims are daily visiting the Langha Adda to pray for opening of Langha. So much so in the first fortnight of March this year about 25 lac pilgrims had door-darshan the distance viewing of the shrine from Langha Adda.
5.That if opened the Kartarpur Sahib Corridor will not cause any security risks because  we the Indian citizens will be visiting Pakistan territory. Though no risk to Pakistan either but their territory will be exposed to us.
6.That notwithstanding this the Pakistan Govt has agreed in principle to allow free Langha to Sikh pilgrims. (Ref: http://www.kartarpur.com/search/label/2.%20PAKISTAN%20OFFERS%20CORRIDOR)
7. That we are aware that India's political relations with Pakistan are not that cordial but the issue of international pilgrimages is above international relations. That for example the Hajj pilgrimage of the citizens of a country inimical to Saudi Arabia is not stopped not even during tense relations. That there are thousands of such examples.
8. That international peace maker and former member UNO, Ambassador Mr. John McDonald visited the proposed Corridor site on  June 20, 2008 and commented that if opened the Kartarpur corridor will mean peace and overall development in the region.
9. That the then Foreign Minister and former President of India Sh. Pranab Mukherjee immediately followed Mr. McDonald and he too visited the site on June 2008 and publicly agreed that Kartarpur Corridor has peace potential in it.
10.That in view of peoples longing for Langha and the strength of the Langha Movement the Punjab Legislative Assembly on Oct. 1, 2010, passed a unanimous resolution in favour of Langha asking the Govt of India to take up the issue with Pakistan Govt and see that Corridor is opened.
11.   That we regret to note that the Govt of India has not bothered these 17 years to acknowledge and take notice of this peaceful peoples longing and movement and not issued a even a single official statement.
12. That in the year 2019 will commemorate 550th anniversary of the Founding Father and the Sikh people will be celebrating it in a big way and thus the Corridor issue will be in the mind of every Sikh, keeping in view the length of movement. That it will thus be in the interest of every body that Langha is opened without delay.
13. That we have full faith in you as a secular  Prime Minister and thus respectfully appeal to you to take up the issue of Kartarpur sahib Corridor with Pakistan Govt in the same letter and spirit as your Govt has taken up the issue of pilgrimage of Kailash Mansarovar Temple with the Chinese Govt.
Respectfully
(B.S.Goraya)
Chief Servant
TO
SH. NARENDRA MODI
HONOURABLE PRIME MINISTER OF INDIA
SOUTH BLOCK, NEW DELHI -110011 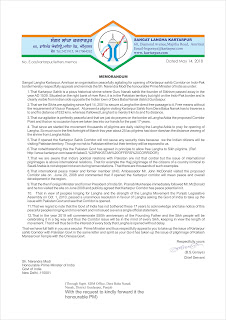 The copy sent via email has kindly been acknowledged by the PM office as under:

Posted by B.S Goraya at 13:12
Email ThisBlogThis!Share to TwitterShare to FacebookShare to Pinterest