I often dream of social unity of Punjabis that existed before 20th century and try to debate this issue among friends on whether is it still possible. Often the response ‘you pursue a mirage’ and I get silent because I find there is a substance in the opposition. Notwithstanding, I don’t  why I don’t give it up all together? The idea keeps lingering in my mind.

I took my lesson on communal harmony 40 years ago and today I feel my first lesson is more realistic and relevant.

My nephew (though senior in age to me)  Budha Singh Marar was posted as BSF inspector at border post Khasa which was only 2km from my school. My father recommended me  a student of std 8 to Budha Singh, “This boys insists on seeing some Musalmans, help him meet one.”

Budha Singh took me to border post. Budha took 3 jawans with him and left for ‘no-man’s land’. A jawan waved a white flag and 4 Pakistani soldiers slowly but majestically moved  through elephant grass towards us. Budha introduced me to their commander and told him that I was curious to see some Pakistani. The commander spoke Pothohari. He asked me a lot of academic questions. Then he encouraged me to ask some question. I asked him, what do you think of us? Do you hate us? He was calm for some time and replied, “You better ask your mind, you have the answer, if you love us, we love you.”

My year of birth is 1951 and I come from the border area. My school was less than one km from Indo-Pak border. Both in the school and village often the  Muslims were subject of discussion. Despite the bloody 1947, I would often find some people spoke in favour of Muslims while the majority complained they were very fanatic. People would tell that the very religion i.e Islam advocates contempt of non-Muslims and they are referred as kafirs.

On the our side our Hindu brothers call the Muslims ‘malechh’ an equally a derogatory term. Our amritdhari Singhs are also equally ‘fanatic’. They can take you to task if you are found bowing before a grave. They have stories from history how Guru Gobind Singh ji himself was punished by the Khalsa when he bowed before a grave.

I think, these historical anecdote are needed to be read in right perspective. I think Hazret Mohd sahib termed kafirs to such opponents (Quraish tribe) who were hell bent to eliminate him. But when I read Gurbani carefully,  I find it condemns hypocrites, of any religious belief. A pundit or a yogi might feel offended when lines critical of pseudo yogis or pundits are referred to. Call of the prophets is against all kind of falsehood. All I have failed is to detect some justification on the harsh treatment of shudras the low castes of Brahmins. But then I find a reference in Ramayan where the god Rama himself consumes leftover (juthe) bers of Bhilni the shudra woman. I consulted a Brahmin on this and he gave an interesting explanation to it by quoting again a shastra the scripture that food or water vomited  (ugla hua) by shudra woman can be consumed in times of distress but a Brahmin is prohibited to consume something touched by shudra. A strange commandment indeed..

Thus the religious beliefs do have pro and against commandments ( and contradictory ) against other communities, no doubt. The civilized world need to devise ways to work with all this.  But unfortunately the governments all over the world have on the contrary encouraged dissensions among various communities. I find worst kind of hypocrisy on the part of Indian governments on this. My view is mool mantra the guiding principle of secret agencies is to create cleavage among communities. I wonder if some government is serious on the subject of communal harmony. The institution of democracy, I feel, is a sworn enemy of communal harmony.

But I find that people have been living together for centuries and communal discord was something unknown before 20th century. It were the British who authored the policy of Divide and Rule and all successive governments in independent India pursued it with much more vigour than the British themselves. To be realistic the graph of communal disharmony is constantly souring continuously for a century. I wonder how this was not the issue in Sikh Raj of Maharaja Ranjit Singh whose 90% ministers were non-Sikhs. I am surprised to read history how the Muslims tried to defend the Sikh kingdom against the invading British.

I squarely hold the Indian and Pakistani governments responsible for fanaticism and communal disharmony especially the school education and media.

I am a Khalsa Sikh but my profession of writing (especially  archaeology) compels me to go to temples and mosques  also. On each occasion I am surprised with the presence of alien religionists at the respective religious places. I find both Hindus and Sikhs at the mosques and tombs and Sikhs in the temples. Sometimes I feel perhaps more graves are worshipped in E. Punjab than W. Punjab. If some fanatic of W. Punjab should visit E.Punjab his fanaticism will surely vanish. It is the Sikhs who are maintaining them. Especially it is the less privileged people who respect all religions. They are mostly illiterate and poor. But at the same time I find they have no less respect for their religion. I realize that it is the education which has spoiled us and made us fanatic. I am therefore compelled to think that an educated person can’t enjoy the fruit of religion. He can at the best become fanatic of any religious belief. This makes me a bit pessimist again. Then again I recover my self and start hoping, ‘no it is possible notwithstanding’. I have examples of West before me where the religion is working well except a few incidences of London.

But the second largest Punjabi newspaper of E.Punjab ‘JagBani’ dated Dec.23, 2008 once again raises my hopes. A journalist Mr. Surinder Kochharh of Amritsar has brought to light a Muslim family of Lahore which is desperately protecting a Hindu temple at Vachhowali Lahore. When I read the story of Choudhry Rehmat Ali Gujjar of Lahore,  I curse myself for my pessimism because I realize ‘yes it is possible: Communal Harmony’.

I have scanned this story in Punjabi and uploaded at:

Today I think my first lesson on communal harmony is the ultimate key to it. We have to remove mutual suspicions of each other.
A Lahore Momin Protecting the Hindu Temples 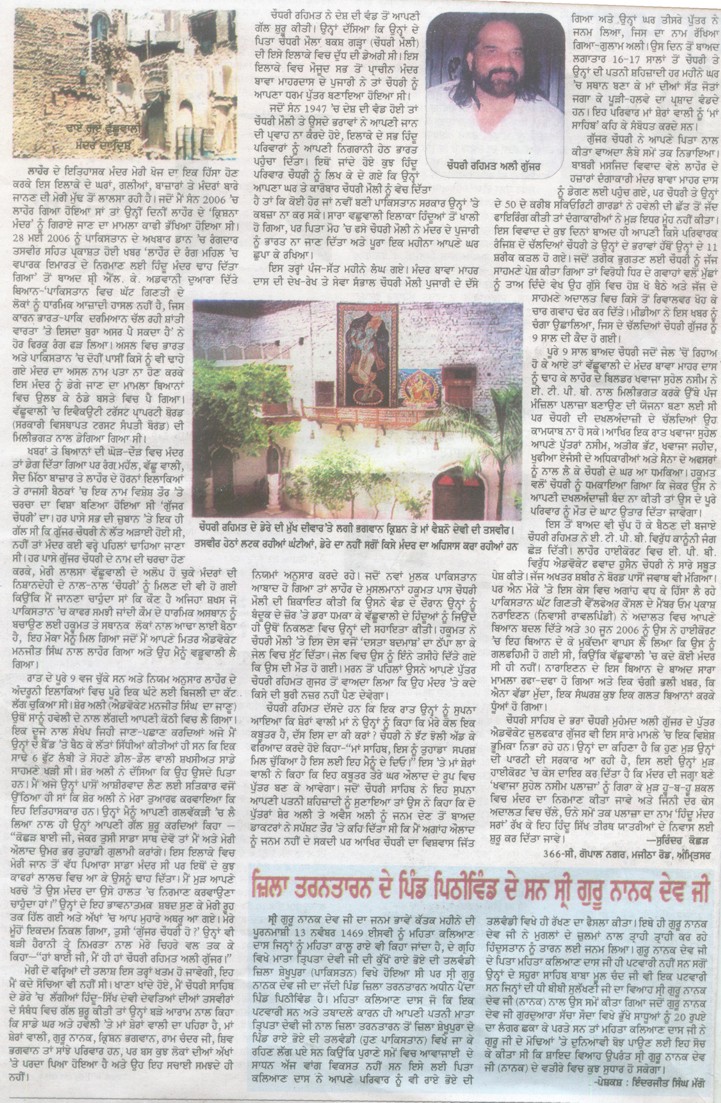 Posted by B.S.Goraya at 17:50
Email ThisBlogThis!Share to TwitterShare to FacebookShare to Pinterest