CELEBRATING THE BOMBARDMENT OF KARTARPUR BRIDGE

A Bridge That was

Constructed by the British around 1927 AD, the Ravi bridge fell a victim to the spate of hatred of 1971 war when the Indian army bombarded it to thwart the advance of Pakistani army. Pakistan sold the steel girders as scrap to exhibit its poverty. It was a two tier bridge lower tier for Rail and upper for road. 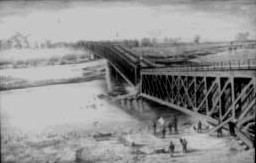 
CELEBRATING THE BOMBARDMENT OF KARTARPUR BRIDGE

Here are 3 photographs of victorious army that bombarded the Kartarpur Bridge in 1971. These photographs were displayed at Batala in a function commemorating the 1971 victory.

The Victorious Unit of 1971 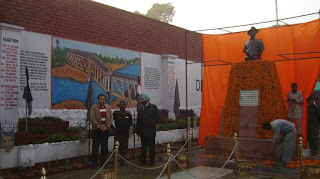 Mark the painting of Kartarpur Bridge 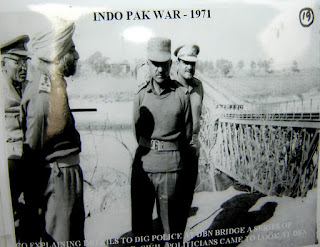 Another photo of Bridge

In a swift operation in 1971, troops of the Dera Baba Nanak Brigade - 1/9 GR 10 Dogra and 17 Rajput - had captured the strategic Pak rail-cum-road bridge over the Ravi.

A number of Pak soldiers were killed or captured in the operation.

The Dera Baba Nanak bridge after its destruction in the 1971 war.

By capturing the Dera Baba Nanak bridge on December 6, 10 Dogra earned the honour of hoisting the first Indian Tricolour on Pakistani soil in the Western sector in the 1971 war.

Dera Baba Nanak town, which lies on the Indo-Pak border in Gurdaspur district, is connected to several important towns in Punjab by road. Across the border in the Dera Baba Nanak enclave was located the important rail-cum-road double-decker bridge connecting a number of Indian towns with Sialkot and Narowal in Pakistan.

For Pakistan, it was of paramount importance to hold this bridge at all costs. For this reason, Pakistan had turned the eastern end of this strategic bridge into an impregnable fortress with concrete bunkers and pilboxes covering all conceivable approaches that were heavily mined. For India, it was equally important to defend Dera Baba Nanak town, which was under constant threat from Pakistan.

In a determined attack, 10 Dogra captured the eastern end of the Dera Baba Nanak bridge. In this battle, the unit lost seven including Capt Devinder Singh Ahlawat. Among the 25 soldiers wounded was the Commanding Officer (CO) of the battalion, Lieut-Col N.S. Sandhu (now a retired Brigadier). The enemy had 30 soldiers killed and a large number of them were wounded. Besides, 14 Pakistani soldiers became prisoners of war (POWs).

Among the 17 awards won by the unit in this battle were two Maha Vir Chakras, which were won by Lieut-Col N.S. Sandhu and Capt Devinder Singh Ahlawat (posthumously). Capt J. Kumar, a gunner, won a Vir Chakra. The unit was awarded the Battle Honour of “Dera Baba Nanak” for its splendid victory in this battle.
Posted by B.S.Goraya at 04:01
Email ThisBlogThis!Share to TwitterShare to FacebookShare to Pinterest