Tomb of Sheikh Brahm on Indo-Pak border :YOU FEEL AN AIR OF ANTIQUITY


Two gates greet you when you arrive: One the hatred gate of BSF (Because you got to cross the border fence) and other the love gate of devotees where bells are hanging as if you are to enter a Hindu temple
Tredding a 100 feet long foot path you get a different feeling. An air of antiquity there. Wan the karoda trees are now very very rare in Punjab. But here they are well preserved for 5 centuries now.
-------------------------

Situated at Khemkaran in district Amritsar, Sheikh
Brahms tomb has been a place of union of the departed
souls for half a century. The mazar is exactly on the
zero line. Sheikh Brahm is mentioned in Janam Sakhis
of Guru Nanak too. We are told that before the
erection of barbed wire on the border the people would
freely come to mazar and pay their respects on every
Thursday while in August it is the mammoth gathering.
In the initial years of separation, even students from
other side would come to attend the school on this
side of border. Barbed fence made it difficult though
they made a gate on the fence.
But then the movement for corridor to Kartarpur
started in year 2000. The Corridor Aspirants then
quoted to the authorities how the arrangements at
Khemkaran were working well and we sought similar
conditions at Kartarpur too because there being exact
parallels. But unfortunately this time since it was a
demand from the Sikh people, the cruel authorities
instead of allowing corridor to Kartarpur closed the
gate at Khemkaran too. We really feel sorry and
apologize to the devotees of Baba Sheikh Brahm. But we
are sure that now the Babas (Nanak and Sheikh) would
take care of the people suffering the pangs of
partition for 58 years. There is always a lull before
the storm. There has been enough of hatred. We fear
the BARBED BORDER would meet the fate of Berlin Wall.
(Note-Khemkaran is opposite to Kasur in Pakistan.) ---B.S.Goraya (I earlier posted it on Facebook)

-------------------------
Scores of devotees thronged the mausoleum of a Sufi saint, Pir Baba Sheikh Brahm, situated on the India-Pakistan border near Mianwali village in Punjab, to pay their obeisance on Thursday. The shrine, located in the Khemkaran Sector, which is barely 100 meters inside Indian Territory, was decorated with glittering festoons and resounded to loud devotional music. Hindus, Muslims and Sikhs religiously visit the mausoleum, who legend has it was greatly inspired by the teachings of Guru Nanak, the founder of the Sikh faith.


The Border Security Force (BSF), which looks after the shrine, allows pilgrims to visit the shrine only during the day. While the Indian pilgrims could easily reach the shrine and pay obeisance, their Pakistani counterparts had to be satisfied with festivities and celebrations on their side of the border due to international travel restrictions. They had carried a symbolic green shawl that is ceremonially offered to the shrine and passed it on to the Indian security forces to be laid on the saint's tomb.


Virsa Singh Valtoha, a lawmaker representing the area, said: "Such common religious places could help in bringing the two age old rivals closer. Government should make arrangements so that Pakistani devotees of Sheikh could easily walk up to the "dargah" (tomb) to offer prayers and seek his blessings as they did earlier."


Villagers say, before the hostilities between the two neighboring nations began, devotees from
Pakistan were allowed to cross over to the Indian side to offer their prayers at the shrine. For all pilgrims, the saint is regarded as manna from heaven. Though he is a 16th century contemporary of the Sikh saint Guru Nanak Dev, his followers believe his powers to bless them are witnessed even today. (ANI)

http://www.thaindian.com/newsportal/south-asia/pir-baba-shiekh-bramhs-dargah-binds-people-on-indo-pak-border_10027487.html
Mianwali (Indo-Pak international border), March 14: Since ages various shrines devoted to Sufi saints have played a major role in promoting communal harmony regardless of their religion.
Pir Baba Sheikh Bramhs Daragah at the Indo-Pakistan international border near Mianwali Village in Khemkaran is one such Sufi shrine that has always brought Hindus and
Muslims close to each other irrespective of their residence being on either side of the border.
Villagers here say that Pir Baba Sheikh Bramh was a disciple of Guru Nanak Dev, the first Sikh Guru.
Thousands of devotees from India and Pakistan converge here to offer their obeisance at Pir Baba Sheikh Bramhs Dargah on every Thursday, the day devoted to Gurus. But the sight evokes emotion when one looks at the deep reverence with which people wait for their turn.
Devotees belonging to the Indian side are frisked by the Border
------------------
Some More Images by B.S.Goraya of www.kartarpur.com 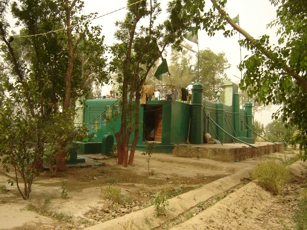 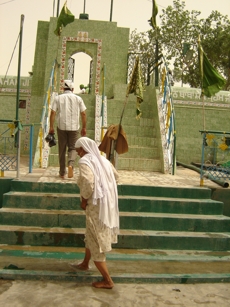 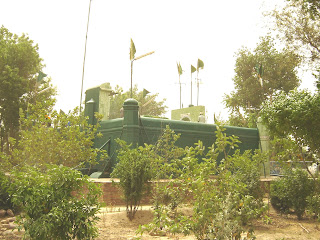 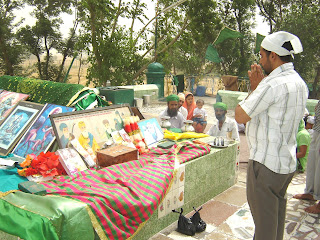 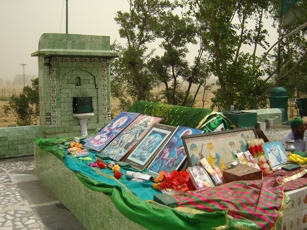 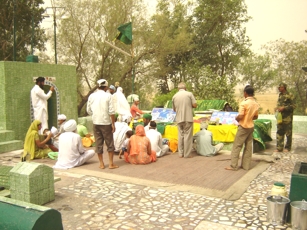 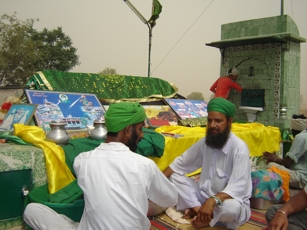 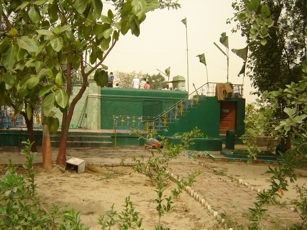 
‘Durgah’ that attracts all


FEROZEPORE: The “durgah” of “Sheikh Brahm”, on the Indo-Pakistan international border near Mianwali Uttar village in Khemkaran sector continues to be source of belief and conviction for thousands of devotees not only from India but on the other side of the fence also. Every Thursday, thousands of devotees pay their obeisance here, and seek blessings. According to villagers “Peer Baba” was a disciple of Guru Nanak Dev.

Villagers said before hostilities between the two neighbouring nations began, hundreds of people from the Pakistani side used to visit this “durgah” every Thursday but after the 1971 Indo-Pakistan conflict, Pakistani devotees have been denied access to this sacred place.

BSF officials said before the launch of “Operation Prakaram” in the aftermath of attack on Indian Parliament, the Pakistanis used to offer prasad, but later they were not allowed to come close to the Indian side of the international border. With the changed scenario now, even the devotees from the Indian side have to go through thorough frisking by the BSF sleuths before entering the “durgah” through the fencing gates, which are thrown open to the devotees only up to 5 pm.

Mr Tirath Ram, a resident of Valtoha, said all the communities of the area irrespective of caste, creed and culture revered the ‘durgah’ which depicted a vibrant scene of religious activities, especially on Thursdays when langer is served to hundreds of devotees coming from far and wide. He said it was unfortunate that the Pakistanis had been debarred access to the “durgah”.

BSF officials said even the officers and jawans of the BSF hold this place in high esteem. Mr N.K. Singh, Commandant, BSF, said this place was visited even by some retired BSF officials to pay their respects.

The BSF has formed a committee comprising the local villagers and BSF officials for the maintenance of the durgah.

Mr Lakhmir Singh, a resident of Mianwali Uttar village, said that Pakistani devotees should also be allowed access which would certainly boost the friendly relations between the two nations.

http://www.tribuneindia.com/2003/20031217/punjab1.htm#3
Posted by B.S.Goraya at 17:55
Email ThisBlogThis!Share to TwitterShare to FacebookShare to Pinterest