The Indian Govt wants to finish SGPC which was known as the parliament of Sikhs. Though the Govt held elections to SGPC in Sept. 2011. Results were also announced. But the Govt didn't issue notification recognising the election and elected members. Since then the elected candidates are befooling the Sikh masses that they are members of the house. You will be surprised to know that no member has ever dared to issue statement to this fact. Because no body wants to displease Badal because all is done with the consent of Badal who gets some concessions from Centre in lieu of this kind of silence. Naturally the house was not formed.
Here innocent people are expecting that the next general election to SGPC be held under the supervision of Punjab Govt. There is a befitting  proverb in Punjabi that the woman is expecting a nose ring while the man has plans to cut her nose
The fact is the present management of SGPC is virtually in the hand of RSS and Centre. Though the present stop gap President Jathedar Avtar Singh was initially elected  after the RSS approved his name and forwarded to Badal yet the RSS doesn't completely rely on him and has managed to appoint its member as Secretary at a record high salary of Rs. 3 lakh a month. 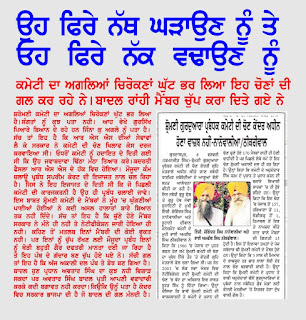 Posted by B.S.Goraya at 17:31
Email ThisBlogThis!Share to TwitterShare to FacebookShare to Pinterest