It is a good news again. 15-6-2010
FIFTH ORGANISATION TO AGITATE FOR KARTARPUR SAHIB CORRIDOR
Every Sikh of Guru Nanak wants access to the shrines which have been deprived from Khalsa Panth and they want beginning for visaless travel be made from Kartarpur sahib. As we know there are following organisations working for corridor, namely


and now fortunately another organisation joins us. It is called United Sikh Mission America headed by Chairman Mr. Rashpal Singh Dhindsa. Right in the beginning they have made a very mature approach. They have raised the issue with Rahul Gandhi. We wish Dhindsa a grand success. You don't know whose efforts will bear fruit. I learn from a news item appearing in Jagbani June 15, 2010. When I visited Dera Baba Nanak on that day people were waiting for me to break this good news. The news item is appended below. 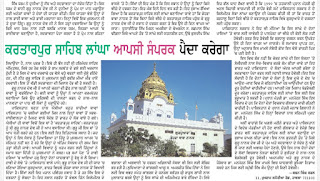 jagbani1562010.jpg
Posted by B.S.Goraya at 19:36
Email ThisBlogThis!Share to TwitterShare to FacebookShare to Pinterest